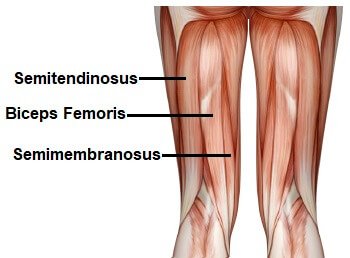 Biceps Femoris is one of the three hamstring muscles found on the back of the thigh.

The muscle runs centrally down the back of the thigh to the knee and helps the other hamstring muscles to bend the knee. 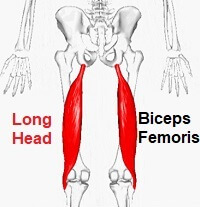 The long head of biceps femoris originates with the semitendinosus tendon, from the lower medial facet of the ischial tuberosity and the sacrotuberous ligament.

The two tendons descend together for a short distance before dividing into two individual muscles.

The long head of biceps femoris forms a fusiform muscle – a spindle shape with the muscle belly being wider than the origin and insertion.

It runs downwards and laterally (from the inner to outer side of the leg) across the back of the thigh, on top of the sciatic nerve. As it nears the knee it narrows and is joined underneath by the short head of biceps. 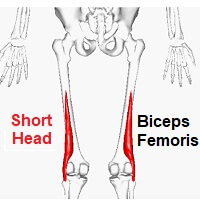 The short head of biceps femoris attaches to the lower half of the lateral lip of the linea aspera, just below the insertion of gluteus maximus, and extends down onto the upper half of the supracondylar line of the femur, with some fibres arising from the intermuscular septum.

It runs underneath the long head of biceps and the two parts of the muscle join forming one tendon in the distal thigh.

Having joined together, just before its attachment to the fibular head, the biceps femoris tendon splits into three.

The biceps femoris muscle has a number of different actions and functions:

Problems in the biceps femoris muscle often cause pain behind the knee.

Strengthening and stretching the biceps femoris muscle can help to improve knee function and reduce the risk of knee injuries. Check out the following articles:

Muscle Group: Biceps Femoris is one of the three hamstrings muscles on the back of the thigh

Special Functions: Straightening the back from a bent position, controls the pelvis in standing, controls the knee as it swings forwards when walking 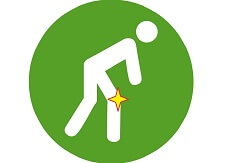 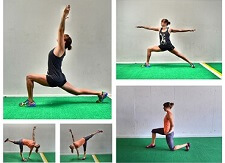