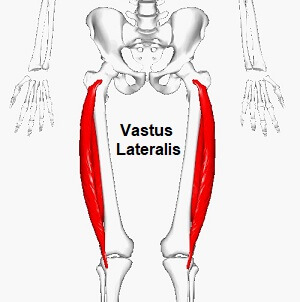 Vastus lateralis, also known as vastus externus, is the largest and most powerful of the quadriceps muscles, found on the lateral (outer) side of the front of the thigh.

It works with the rest of the quadriceps to help straighten the knee and with activities such as getting up from a chair and going up and down stairs.

Tightness is the vastus lateralis muscle is a common cause of outer knee pain as it pulls the kneecap slightly out of position resulting in friction and irritation when the knee moves.

Vastus lateralis originates from various parts of the femur (thigh bone) over a large area:

These parts blend together to form a broad, flat tendon (known as an aponeurosis) from which come the muscle fibres that run downwards and forwards to the knee joint.

The main muscle bulk of vastus lateralis is found on the upper half of the lateral side of the thigh. It then forms a broad tendon which narrows as it approaches the patella (kneecap).

Here, the vastus lateralis tendon inserts into one of the other quadriceps tendons (rectus femoris) and the outer side of the patella. Some fibres blend with the iliotibial band (ITB) which to a large extent replaces the local part of the joint capsule and then attaches to the tibial tuberosity, just below the patella.

Vastus lateralis works with the other quadriceps muscles to extend the knee, particularly with activities such as getting up from a chair, climbing stairs and cycling.

It is also the recommended site for intramuscular injections in infants under seven months old and in those with loss of muscle tone, usually due to not being able to walk.

Tightness in vastus lateralis and resultant lateral retinaculum tightness can cause the patella to shift or tilt which can cause problems with patella tracking and increase the risk of patellar dislocation. This tightness can be treated with stretching exercises or lateral release knee surgery.

The most common knee problems associated with vastus lateralis are:

If you have knee pain due to vastus lateralis problems you may be interested in: 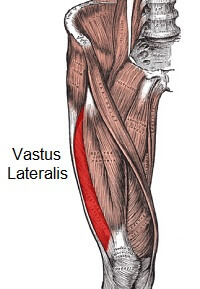 Insertion: Rectus femoris tendon and lateral border of the patella 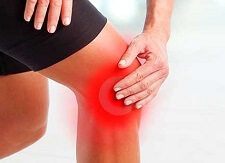 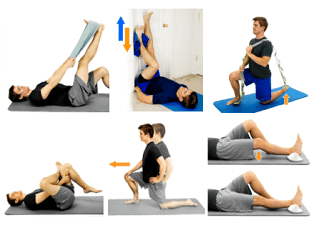