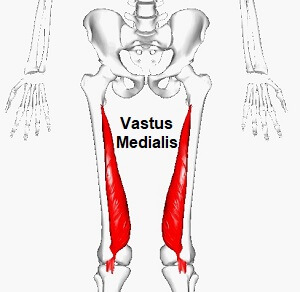 Muscle Group: Vastus Medialis muscle is part of the Quadriceps

Origin: Large portion of the anteromedial aspect of the femur

Insertion: Medial border of the patella (joins with the other quads tendons), medial condyle of the tibia and the tibial tuberosity via the patella tendon

The vastus medialis muscle is the most medial of the quadriceps muscles, found on the medial (inner) side of the front of the thigh. It works with the other quadriceps to straighten the knee.

Where Is The Vastus Medialis?

The vastus medialis muscle has an extensive origin on the anteromedial surface of the femur (thigh bone) which begins at lower medial end of the intertrochanteric line, runs down around the medial aspect of the spiral line and the medial lip of the linea aspera. 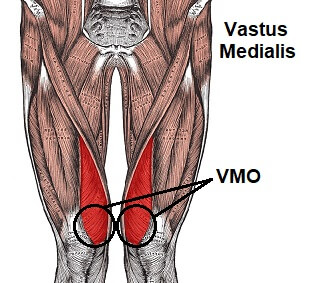 It continues on to the upper two thirds of the medial supracondylar line, medial intermuscular septum and the adductor magnus tendon.

The muscle fibres join with one of the other quadriceps muscles, rectus femoris, the medial border or the kneecap and the medial condyle of the tibia, fusing with the deep fascia and replacing the lateral joint capsule.

The fibres that join with the other quadriceps muscles surround the patella and attach to the tibial tuberosity on the front of the tibia (shin bone) just below the kneecap via the patella tendon.

Vastus Medialis helps the joint to lock in the final stages of knee extension as the femur rotates medially. The portion just above the kneecap, often referred to as vastus medialis oblique or VMO, is often thought of as being anatomically and functionally distinct from the rest of the muscle, though this is subject to debate.

The VMO plays an important role in stability particularly of the kneecap by resisting the tendency for the patella to move laterally (outwards) due to the femoral angulation and reducing the risk of kneecap dislocation.

In some cases, usually following an injury or due to biomechanics, vastus medialis oblique can become weak, fatigued, mis-fire or switch off altogether. This can lead to problems with patella tracking (how the kneecap moves) and anterior knee pain such as patellofemoral pain syndrome.

Vastus Medialis as a whole works with the other quadriceps muscles to straighten the knee, all working strongly through their entire range. They work in activities such as standing up from a seated or kneeling position, going up and down stairs, cycling and squatting.

How To Strengthen Vastus Medialis 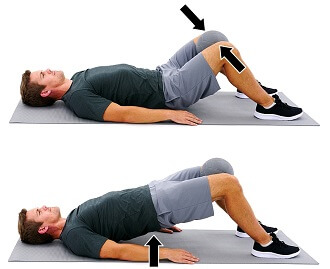 Weakness in vastus medialis, particularly the VMO, is a common cause of knee pain and instability and puts you at greater risk of kneecap dislocation.

But there are simple vastus medialis exercises that you can do to both strengthen and stretch the muscle and target the VMO. Most people with knee problems would benefit from doing VMO exercises.

Here are some related topics you may be interested in: