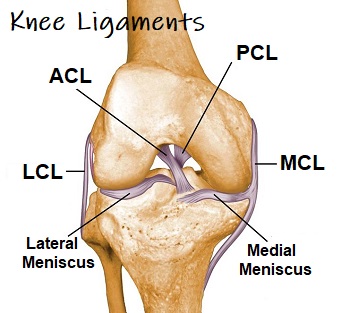 The knee ligaments are one of the most vital components of knee stability and control.

The ligaments of the knee are frequently damaged by sudden twisting movements e.g. changing direction quickly when running, or a force through the knee e.g. a fall or tackle.

After a ligament injury, the knee can feel painful, weak and unstable. This may only last a few days, but if left untreated, can persist for many months, so early treatment is key.

Here we will look at the different knee ligaments, where they are located, how they work and how they get injured.

Ligaments Of The Knee

The four main ligaments in the knee are:

The collateral and cruciate ligaments are generally considered to be the main ligaments of the knee but there are a few others that work alongside them, although not everyone has all of them!

There are other knee ligaments are: 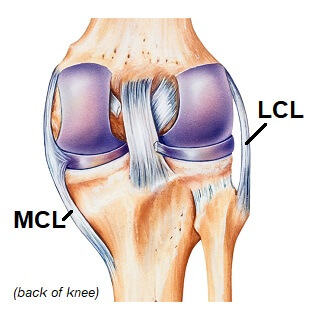 The medial collateral ligament is found on the medial (inner) side of the knee. It is a broad flat ligament of the knee, approximately 10cm long, that attaches to the femur and the tibia.

The MCL resists forces through the outer side of the leg that push the knee inwards, known as valgus forces.

The medial collateral ligament gets damaged when the ligament is overstretched and tears, typically from:

MCL tears result in pain and swelling on the inner side of the knee joint and the knee may feel unstable depending on the severity of the injury.

Visit the MCL injuries to find out loads more including treatment and prevention strategies.

The cruciates are the most important knee ligaments in providing stability of the knee. There are two cruciate ligaments, anterior (ACL) and posterior (PCL). 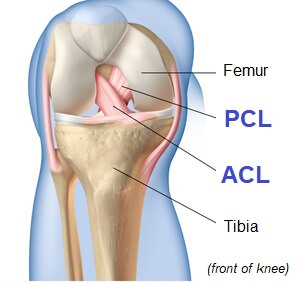 They sit deep inside the middle of the joint attaching to the tibia and femur. They cross over each other, hence their name, and resemble the St Andrews Cross (X).

The cruciate knee ligaments are each about as thick as a pencil and are extremely strong, with a breaking strain of about 60kg.

They get their name from where they attach to the tibia, i.e. the ACL attaches to the anterior (front) surface of the tibia and the PCL to the posterior (back) surface.

The cruciate ligaments job is to control the forwards and backwards movement of the knee joint. They are also important in providing proprioception – the body's ability to know where it is and to make subtle adjustments to maintain balance.

Each knee cruciate ligament is about 2cm long and any force which stretches it an additional 1.7mm (8% total length) will result in complete ligament tear.

The anterior cruciate ligament sits deep in the middle of the knee joint. It attaches to the front of the tibia and the back of the femur. 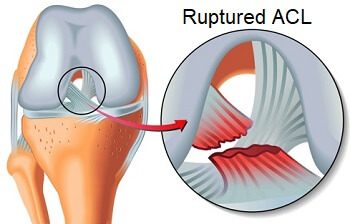 The ACL stops the tibia sliding too far forward in relation to the femur and is the primary structure for proprioception.

The anterior cruciate ligament is commonly injured in sporting activities such as football and skiing, usually from awkward twisting movements, sudden stopping or landing awkwardly.

It can take up to a year to recover from an ACL injury so prevention has become an important factor in sports training.

To find out more visit the ACL injuries section for in-depth information on injuries, surgery and rehab.

The posterior cruciate ligament also sits deep in the knee joint and it attaches to the back of the tibia and the front of the femur. 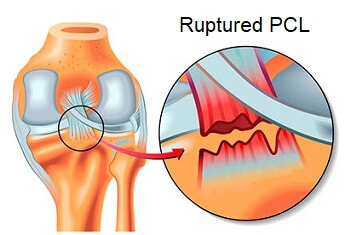 The PCL is shorter than the ACL (3/5 of the length) but is twice as strong. As a result it is much harder to injure to PCL.

The PCL stops the tibia moving too far back in relation to the femur.

The posterior cruciate ligament is typically damaged by a sudden force through the top of the shin, from a car accident or fall, or by hyperextending the knee.

You can find out loads more about the causes, symptoms, treatment and prevention strategies in the PCL injury section.

Anything that stretches the knee ligaments beyond their elastic limit will cause the ligament to tear. Ligament tears vary from a minor sprain where only a few fibers are torn to major tears where the ligament ruptures completely.

You can find out more about knee ligament injuries, including the causes, symptoms, treatment and injury prevention: 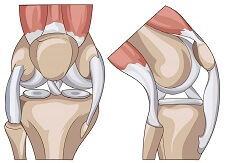 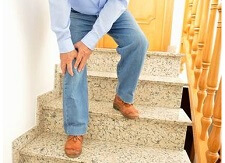